At Seton Catholic, students can join a variety of clubs that appeal to every interest - from social justice to trivia to fishing - and much more! All clubs are student-run and new clubs can be formed at any time. We are always adding new clubs to our lineup, and all students are invited to join at any time!

Chess Club official meets during lunch on Mondays, but chess practice happens every day. In chess, students play each other to practice the fundamentals of chess with a goal of improving memory, strategic thinking, and tactical maneuvering.

This important committee is made up of parents, students, professionals, and experts that are well-versed in topics relating to equity, diversity, mental health and inclusion.  Members come with various cultural and ethnic backgrounds and wide-ranging life experiences. The advisory committee assists in various events and activities that help foster and reinforce the school's welcoming environment along with addressing ways to promote social justice and Catholic social teachings. The advisory committee also reviews suggestions and materials that have been received from various stakeholders in our school community.

This committee meets the last Tuesday of each month. 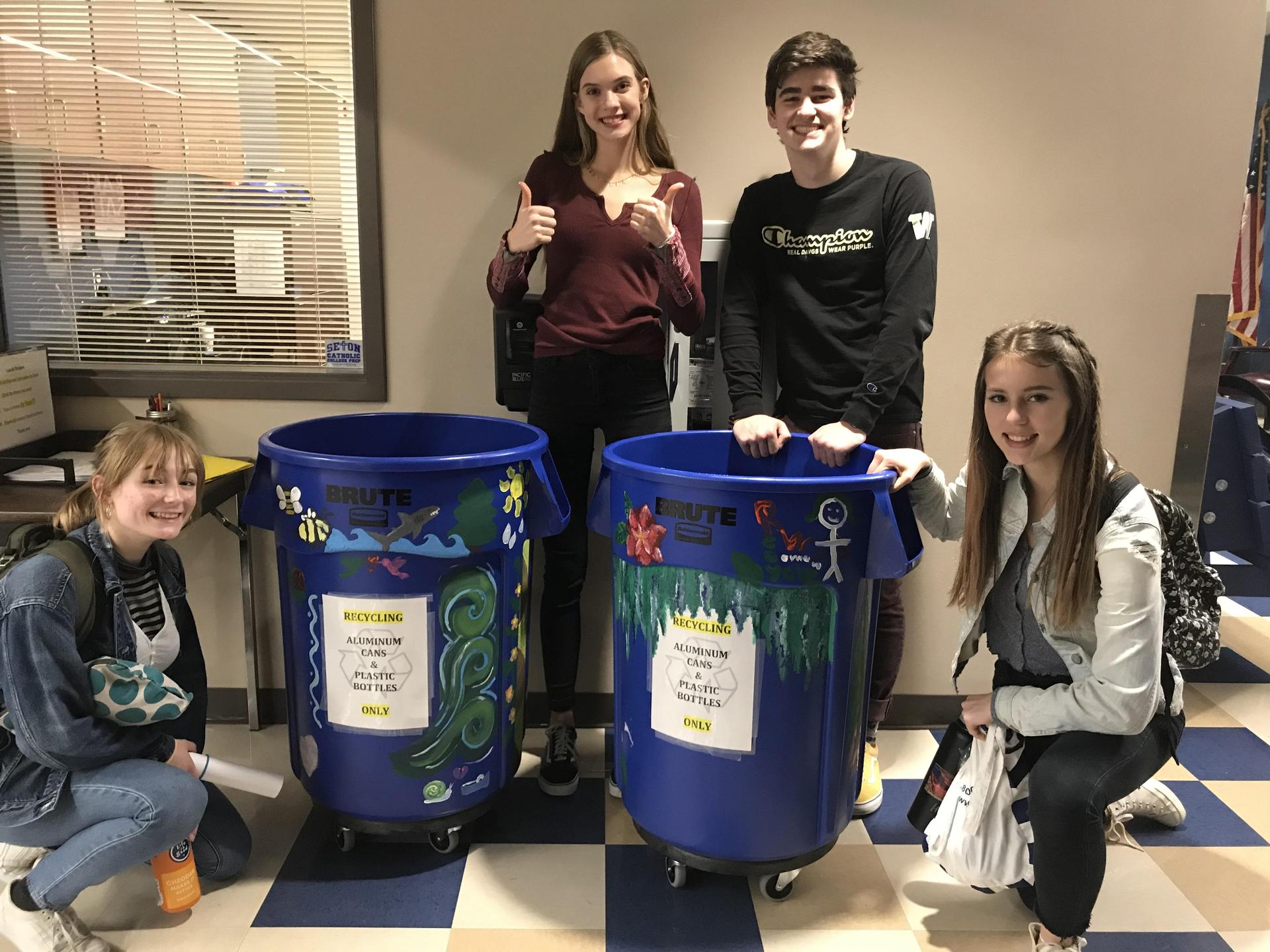 Founded in 2019, the Seton Catholic Eco Club is dedicated to preserving the environment and raising awareness about how to live an eco-conscious life! Projects include recycling drives, fundraisers, and public service activities.
This committee meets the 1st and 3rd Tuesday of the month.
Advisor: Keri Bustamante 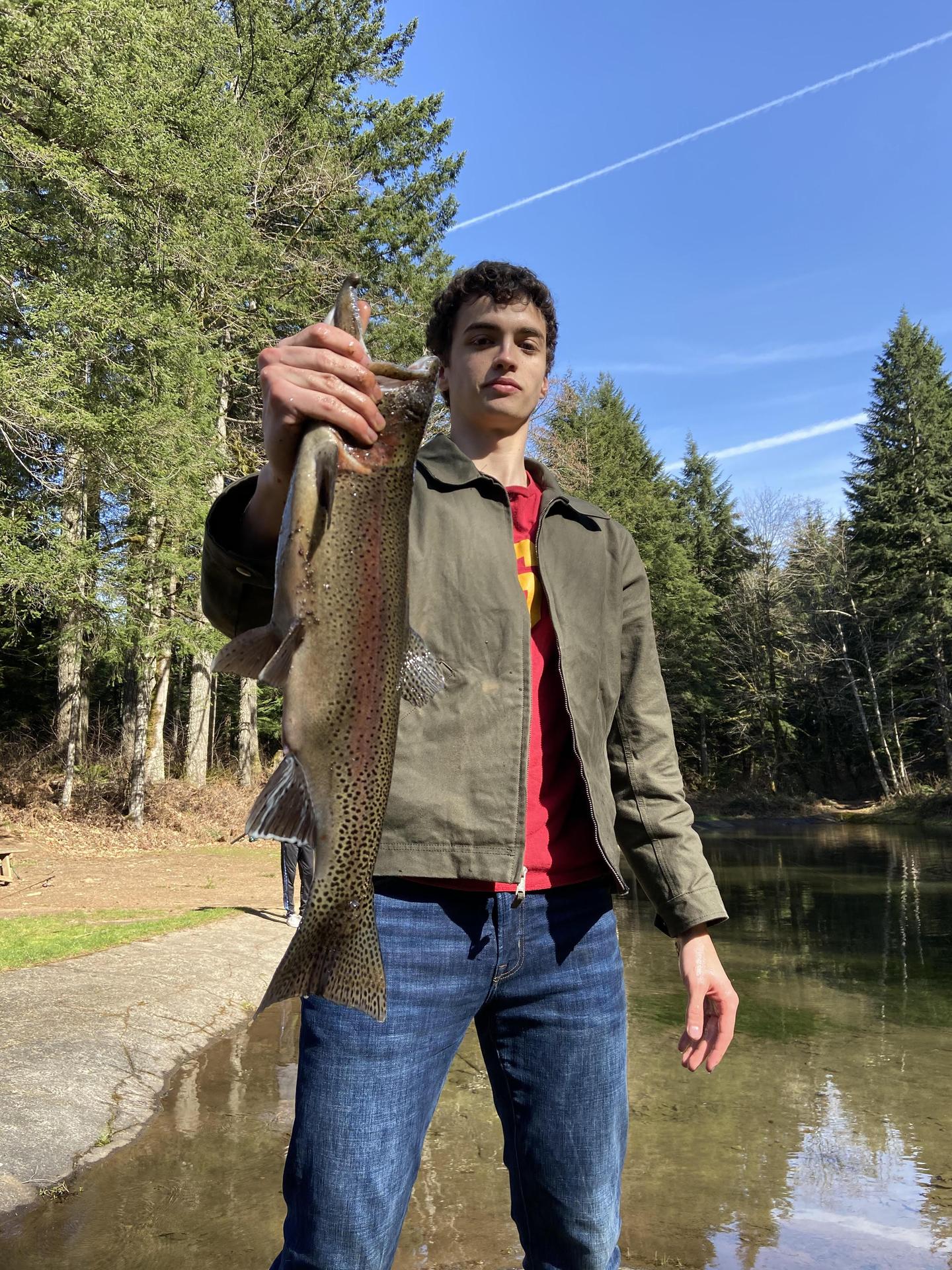 Seton's Fishing Club was founded by our principal, Dr. Rusk, and is open to avid fisher-folk and novices alike! Members can share stories, partake in fishing challenges, and learn new techniques.

Meetings:  Last Friday of the month

Guitar Club is a new after-school opportunity at Seton. Meeting every other Thursday, Guitar Club gives students who either play guitar or are interested in playing guitar a space to learn and share with other students. The club is loosely structured to give students the freedom to follow their own level of play, and at their own pace.

Knitting Club
This is a weekly service opportunity for students that want to have a community to talk to or hang out after school.
Knitting experience not necessary, we will gladly show you how to knit.
Meeting: Tuesdays after school, room 214
Advisors: Jordan McCarty (Class of '24), Lynn Nieda (parent) 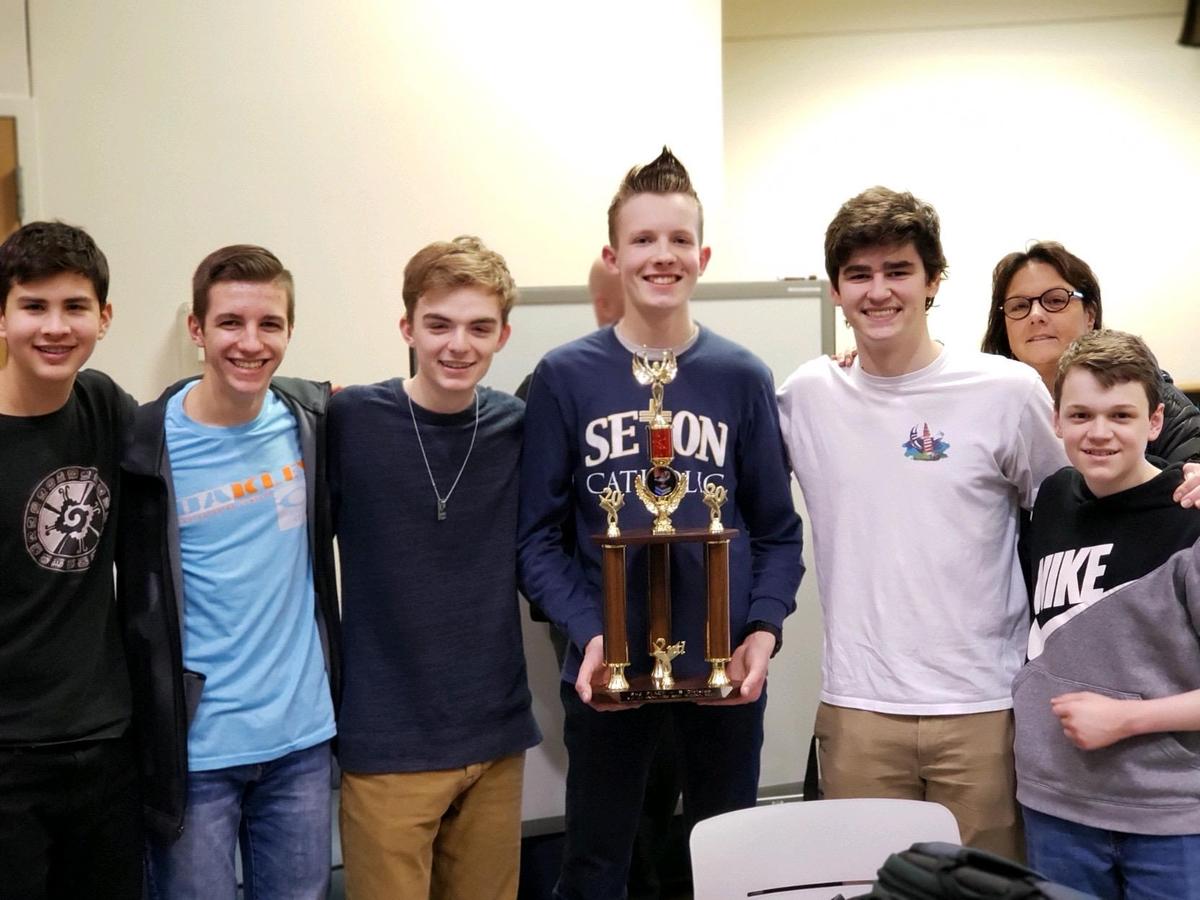 Knowledge bowl is an academic competition that involves fast-paced thinking and teamwork. Students work together to solve oral and written questions, which result in scored points. Our school’s teams compete against other teams from neighboring schools to see who can answer the most questions in math, science, history, language arts, and more. Team members race against each other to be first to “buzz in” with the correct answer. In previous years, competitions were held live at a host school. The location of this year’s competitions have yet to be determined.

Meetings:  Wednesday and Thursday at lunch

Liturgy Choir
Liturgy Choir provides the music for our weekly school Masses as well as special liturgical celebrations throughout the year. Students are able to share their musical gifts and talents playing the piano, guitar, percussion and singing liturgically appropriate contemporary Christian songs and traditional hymns. We practice once a week during lunch to prepare for that week's Mass.
Meetings: Mondays at lunch
Advisors: Keri Kutch, Satinee Mendez, Carol Patton 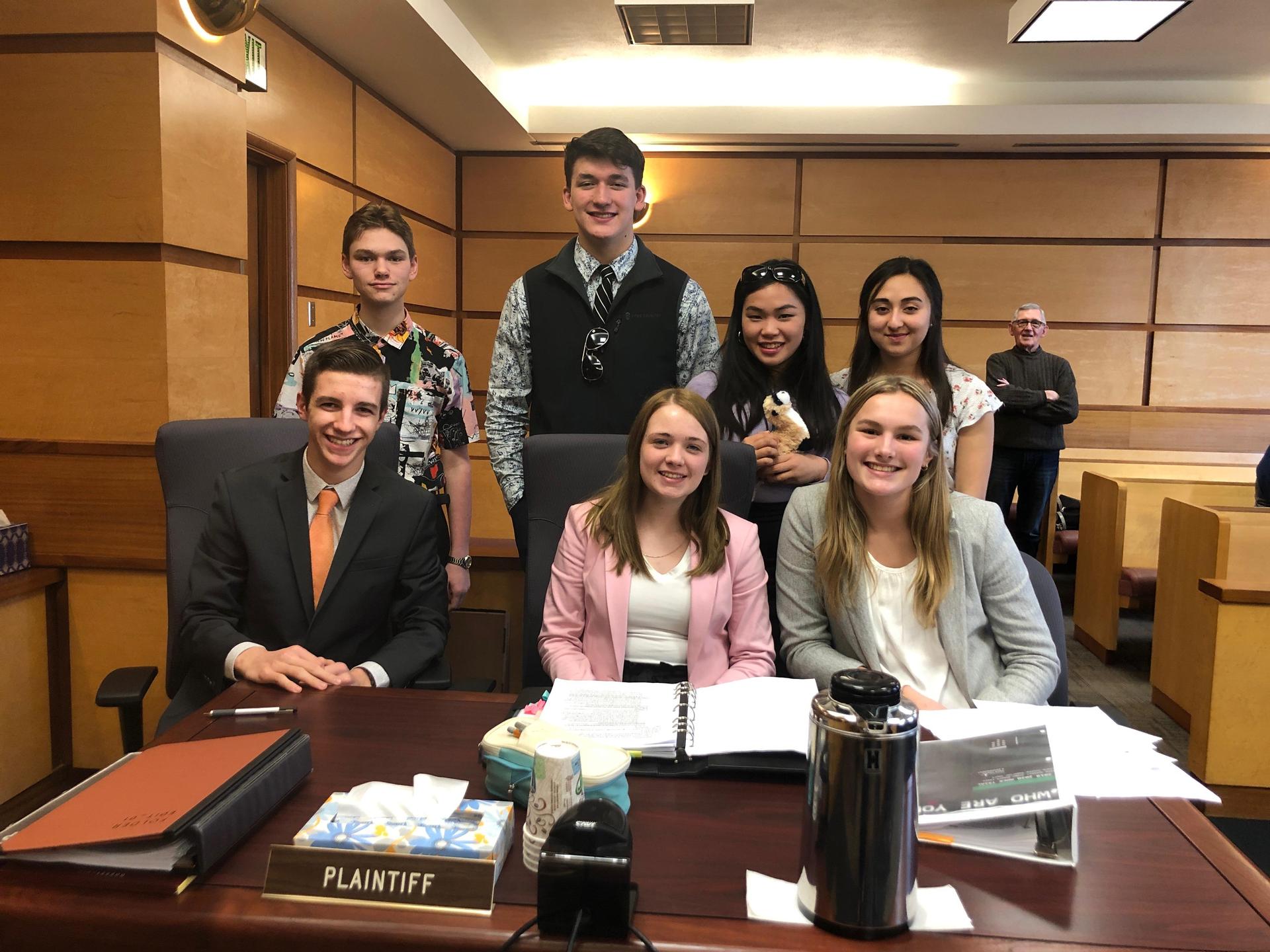 Mock Trial revolves around the study of a different case each school year. The case is written by a Clark County judge and is sent to teams throughout the state. The competitions are sponsored by the YMCA. The case usually comes out around the end of September and the students start to determine which role they would like to play after reading the case and deliberating a bit on the different personalities.
The witness roles entertain a more dramatic side with students playing a “role” and studying the personality of the witness through the statements they have given to the court for evidence. The attorney roles are divided into Prosecution and Defense and students interested in these roles often have aspirations of being an attorney or then see a theme in the one side or the other that they believe they can argue and present well.
After preparing for the case just as attorneys would, preparing questions for witnesses, working with witnesses to get the right reaction from the jury and perfecting pretrial and opening statements, and outlining a closing statement from October through February, we face other teams in competition, usually held at the Clark County Courthouse.
During the competition our Defense team will compete against another school’s Prosecution and vice versa. Real lawyers volunteer to sit on the “jury” and rate the “performance”. And real Judges volunteer to “hear our cases”. It is really very much like a real courtroom with a few differences. Unlike real trials there are time limits for different parts of the trial so students have to really manage their witnesses and be careful not to use up time that will be needed for future witnesses.
Awards are presented after several rounds with different teams for best prosecuting attorney, best defense attorney, best witness and best team. The top teams go on to compete in a state competition. The Seton Catholic team went to the state competition in 2021.
The Seton Catholic Mock Trial team began during the 2017-18 school school year. Our current coach is Attorney and Seton parent Kasey Vu.
Meetings:  Monday, 5:45-7:00 PM
Advisors: Dr. Juliana Smith & Logan Froerer 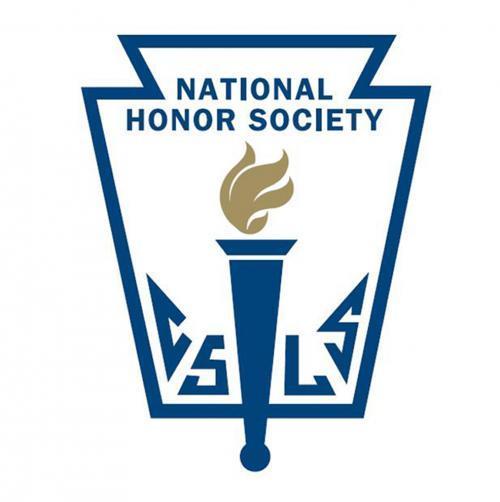 The National Honor Society (NHS) is the nation's premier organization established to recognize outstanding high school students. More than just an honor roll, NHS serves to recognize those students who have demonstrated excellence in the areas of scholarship, service, leadership, and character. Chapter membership not only recognizes students for their accomplishments, but challenges them to develop further through active involvement in school activities and community service.

Meetings:  7:30am, 2nd Tuesday All Members, 4th Tuesday-Cabinet Members only

This club provides an opportunity for students interested in the great sport of rock climbing. Whether a person is a beginner or an experienced climber, in this club we learn how to appreciate the growth of each member of the club. We put together outings as a group to indoor facilities throughout the year, which happen primarily on Fridays.

Come join us on the crags!

Science Olympiad comes in many shapes and sizes to fit your needs. Science Olympiad functions much like a football or soccer team, requiring preparation, commitment, coaching and practice throughout the year. Each school-based team is allowed to bring 15 students who cross-train for a variety of events in their skill set.
Science Olympiad competitions are like academic track meets, consisting of a series of 23 team events in each division (Division C is high school). Each year, a portion of the events are rotated to reflect the ever-changing nature of genetics, earth science, chemistry, anatomy, physics, geology, mechanical engineering and technology. By combining events from all disciplines, Science Olympiad encourages a wide cross-section of students to get involved. Emphasis is placed on active, hands-on group participation. Through Science Olympiad, students, teachers, parents, principals and business leaders bond together and work toward a shared goal.
Teamwork is a required skill in most scientific careers today, and Science Olympiad encourages group learning by designing events that forge alliances. In Elevated Bridge, an engineering whiz and a kid from wood shop can become gold medalists. Similarly, a talented builder and a student with a good science vocabulary can excel in Write It Do It, one of Science Olympiad's most popular events.

The main purpose of the Stock Wisdom, Personal Finance club is to learn about the stock market and how it works as well as issues dealing with personal finance like debt, budgeting, etc. Each student begins with a hypothetical $10,000 to invest and we compete with each other over the course of the year to see who can create the most value. This year we had each club member pick three stocks - one long-term investment and two stocks which he/she thinks could do well once the economy recovers.